A few months ago, we headed north of the border for a week in beautiful Scotland. During our stay, we couldn’t resist a visit to Glasgow. We’d heard great things about the city and its street art, so were eager to check it out. It didn’t disappoint.

We discovered a lot of amazing street art. Here are just some of our favourite finds.

Smug’s unofficially titled ‘Saint Mungo’ mural frequently features on street art Instagram feeds. It was this mural that first caught our attention that Glasgow was a street art destination. Seeing it in real life, it didn’t disappoint. It is a huge wall, and looks amazing.

Smug’s artwork can be found all over the city centre.

This small mural is by Rebel Bear, who is sometimes referred to as the ‘The Scottish Banksy.’

Rogue One and Ejek

This is one of several (very) large murals by Rogue One and Ejek at Strathclyde University.

This huge mural of indigenous people was created for COP26 by Fearless Collective. It celebrates indigenous environmentalism.

To commemorate the comedian’s 75th birthday, several murals of Billy Connolly were commissioned. We saw a couple of these on our visit.

One of the things that made discovering these artworks so easy was Glasgow’s mural trail map. Much like our own map of Sheffield’s street art, Glasgow has its own. Having seen the value of street art to the city, Glasgow City Council have set up an initiate to fund murals across the city centre. The map is run by the council to help people find the diverse range of art they have commissioned.

Glasgow City Council’s support for its street art scene looked to be paying off. As we wandered the city, we spotted other groups and individuals following the trail. It is clearly helping Glasgow’s tourism.

It would be great to see Sheffield City Council provide similar support for the city’s street art scene. 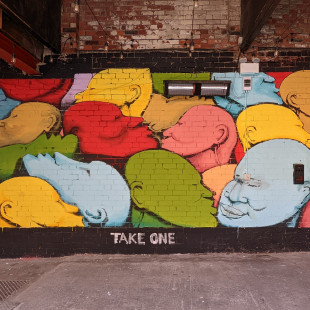