Earlier this year Manchester hosted the Cities of Hope festival which brought nine of the world’s most renowned street artists to the city to create new landmarks of hope on walls across the Northern Quarter and surroundings. Included in the nine artists was Sheffield’s very own Phelgm.

I’d been meaning to go to Manchester for ages to check out these new murals, but only found the time to do it last week. These new murals are amazing pieces. Each of the nine artists took on a social justice issue for their mural. I’ve added all the murals below along with their locations in case you want to track them down and see them yourself (which you really should do as they are stunning and the photos really don’t do them justice).

Just opposite Nevercrew’s massive mural is a much smaller piece by French stencil artist C215. I actually found a couple of pieces by C215 in the Northern Quarter (the second is on Warwick Street). I believe that both were painted for Cities of Hope. C215’s social justice issue is homelessness.

Norwegian artist Martin Whatson uses grey monochromatic images made with stencils and then graffitis with vibrant colour to bring his works to light. Martin’s social justice issue is the environment and his artwork can be spotted on Faraday Street.

Pichiavo are a renowned graffiti duo from Spain. Their colourful contribution to Cities of Hope has the theme of conflict and features two gods battling one another on Port Street.

Around the corner from the battling gods and on the north border of the Northern Quarter on Great Ancoats Street is South African street artist Faith47’s mural. It takes on the theme of gay rights and depicts two men kissing.

The next three murals are all outside of the Northern Quarter just to the west of Oldham Road. The first two are quick to spot. German artist Case’s photorealistic mural on Cable Street about disability; and Axel Void’s mural about existentialism.

Sheffield street artist Phlegm’s contribution to the festival is hidden away on the other end of the building with Case’s wall mural on Cable Street. His theme is sustainability; it’s another of his iconic black-and-white illustrations. This one features a city in a bottle.

Finally, and back in the Northern Quarter, street artist Hyuro took on the issue of war children. Her large scale mural of a blindfolded child soldier is hidden away off Tib Street near to the Manchester Craft and Design Centre.

So those were the murals painted by the nine invited artists. There were a few other murals painted for the festival by local artists that I will try and post to the blog at a later date. It’s great to see street art being given a platform to spread the important message of hope.

If you like these make sure you also check out Sheffield’s own street art festival from a couple of months back Feature Walls. 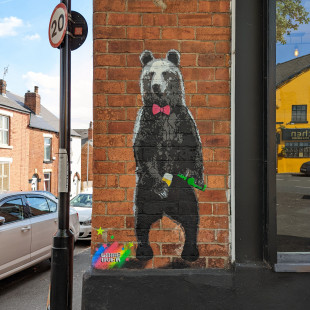 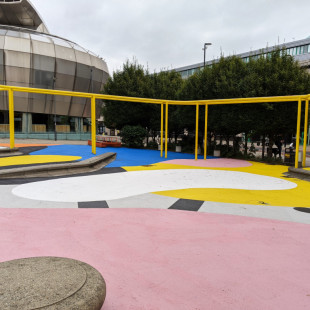 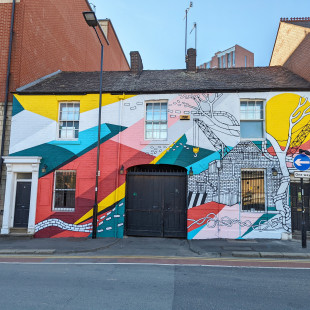