The other week I went over to Manchester to seek out a wall mural painted by Phlegm earlier this year as part of the Cities of Hope festival. Whilst looking for it I found a number of paintings in Manchester’s Northern Quarter by some of Sheffield’s street artists that I thought I should share here.

Earlier this year Manchester hosted the Cities of Hope festival which brought nine of the world’s most renowned street artists to the city to create new landmarks of hope on walls across the Northern Quarter and surroundings. Included in the nine artists was Sheffield’s very own Phelgm. 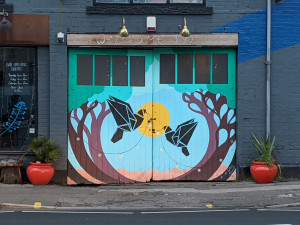